Tatting is a surprisingly ambiguous word.  Yarn or ink?  Both can involve needles, technically!

I enjoy picking up new yarn hobbies, and I've only ever heard of tatting -- never seen examples of it, or met anyone else who tats, or even knows what tatting is ("like tattoos?"). Tatting is a pretty old fibercraft, and is much less efficient at creating fabric than knitting or crochet or weaving.  I think it's primarily a decorative craft, as tatted fabric is fairly open and lacey, and would not drape well.

In any case, I finally purchased some tatting shuttles and needles and embarked on a short YouTube tutorial journey.

It seems like most tatting tutorials and patterns are geared toward shuttle tatting.  Needle tatting is much easier to learn than shuttle tatting, says the internet.  I would agree with this claim.

I tried shuttle tatting first because the shuttles arrived a few days before the needles did.  It did not go well.

These are some of my first few attempts.  The very first attempt is not pictured here because it was just a mass of tangled thread.  Getting the knot to flip was difficult and I failed to do so quite a few times, so rings didn't close properly. 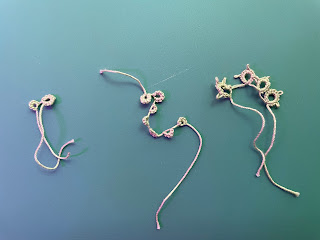 Overall, it was slow and painful.  I was able to get a few rings on the same thread, but as you can see, sometimes they didn't close, there were large gaps between them unintentionally, and some just are not properly formed. 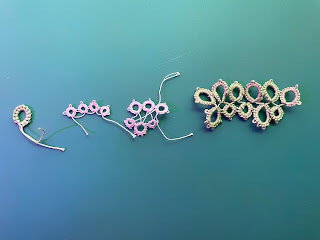 My main issue with shuttle tatting was I was pulling the thread too tightly, and that issue is fully eliminated with needle tatting, since the tension is limited by the circumfrence of the needle.  Another issue I had with shuttle tatting was flipping the knot -- again, that's not an issue at all with needle tatting since stitches are formed directly on the needle rather than on the thread itself.

I made some doilies with a variety of threads.  The rainbow was the first one (and has a mistake!), then the pink, then the green.   Pattern from be-stitched. 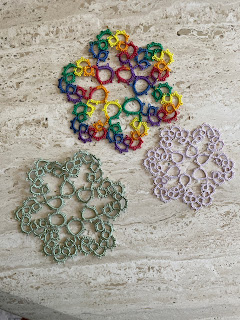 I learned from these doilies that you can needle tat from the ball -- ie thread your needle with a long thread, and then make stitches with the ball thread, rather than that long thread.

I have also learned since completing these that the stitch after a picot counts as a stitch, and not a picot.  I thought "picot" meant "leave a space, do a stitch", but it really just means "leave a space before your next action".  Which may explain why those doilies are a bit floppy.

I kept trying shuttle tatting every now and then.  I'd pick up a shuttle and try a ring, fail, and put the shuttle down.  The rings got better with time.  Eventually I was able to make a ring whenever I wanted to.  Then I tried picots -- getting the stitches to stay flipped after a picot introduced a new challenge.

After a while, picots became easier and more consistent.  For the doilies, I had to learn how to do a chain, and that was the next thing I tried with shuttle tatting.  Like needle tatting, you need two separate yarns going at once to make a chain (as far as I know).  So I also learned how to manage two shuttles at once.

I found a new pattern from Tatting by the Bay's free pattern section: Solstice.  I thought it was appropriate to try out since summer solstice was coming up at the time. 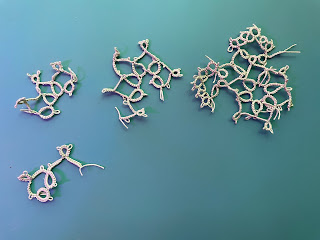 I wanted to see if needle tatting would work, and the bottom left is the needle tatted attempt.  I was reversing work improperly, but think it would have worked if I continued.  The stitches in that sample are even and tidy, and everything lies flat, unlike the other samples.

The top left piece was the first try.  I was posting the shuttle and doing half stitches at start/end of chains to make everything neater (from this YouTube video), and individual rings and chains did look slightly neater than previous attempts.  But even though I was reversing work properly (intuitive guide to reversing work on YouTube), nothing was lying flat.

So I started over, which is the piece in the middle.  Slightly neater, slightly flatter, but transitions from rings to chains and chains to rings was still not very neat.  I was having a hard time telling where to put threads (front to back?  back to front?) and thought that was the issue.  And so I started over again.

The piece on right was the best-looking attempt, but again, it's pretty wonky.  I started the second round of the pattern and decided it wasn't getting better.

Here's that piece on left from a shallower angle: 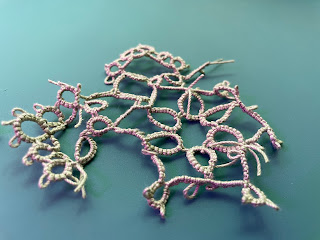 Obviously something's gone wrong.  I went back to a sample pattern Tatting by the Bay posted, because I recalled something about the red/blue colors being explained in that pdf.  And immediately figured out the issue.

I assumed the red/blue simply corresponded to shuttle color.  That was a bad assumption.  The colors actually correspond to the color of thread forming stitches on that section of the pattern.  So for rings, I was getting it right, because rings are formed with one shuttle.  But for chains, I was getting it wrong.

My fourth attempt with threads where they should be: 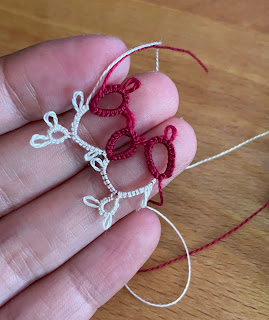 The picots are probably far too large and there are some tension issues still, but everything is lying flat and I don't have to try and figure out where threads are supposed to go when moving between chains and rings.  The ends just sort of intuitively fall where they need to.

Tatting is a simple fiber craft to pick up, but simple things are more difficult to do well.  And tatting techniques range from tedious to ingenious and innovative all at once.