However, it definitely works and takes pictures!

I've wanted a macro lens for quite a long time.  The only thing stopping me from getting one is the cost of macro lenses.  They are, to put it lightly, incredibly expensive.  And I wasn't sure I wanted to invest a lot of money for a nice lens if I wasn't sure I was going to stick with a Nikon body for the future, since I do want to upgrade to a newer camera soon.

Two days ago, I found a listing on craigslist for a $95 macro lens, Nikon F-mount.  Too enticing to pass up!  I bought it from the seller today.

The lens is totally manual.  Aperture and focus are controlled on the lens, and it's so old that it doesn't communicate with the camera at all.  So images don't save with aperture info, and I also don't get exposure information -- lots of test images are needed. 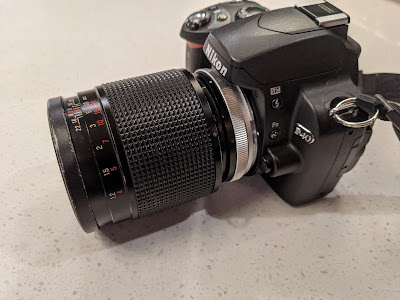 And here's the lens fully extended. 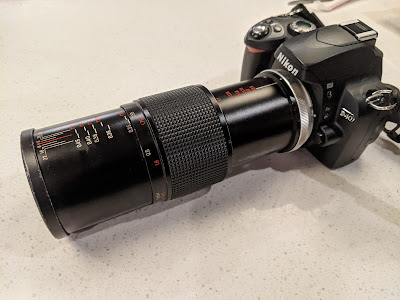 My SO made some, ahem, colorful remarks about this lens's ability to elongate so magnificently.

The markings on the lens are still sort of a mystery to me.  I know some correspond to magnification level, and some appear to be distance to object for focus.  There are still a few I haven't figured out though.

The focus ring is nice and heavy -- it takes quite a few turns to get from one end to the other though, definitely not something that would be fun to use for a fast-moving subject.  The aperture dial has clicks for half stops as well, and is a little less clicky/heavy as the one on my Rokinon, but still nice to use.

The lens is in very good condition and works beautifully as a macro lens.  It's a pretty bad telephoto lens, but can produce some passable shots.  Doesn't seem to do portraits well, but would make some interesting photos, I think.

My main issue in picture-taking is my really shaky hands, and without any stabilization in the lens or in the body, I generally need a very fast shutter speed and very wide aperture to take sharp pictures, plus good light.  (Tripods would help, of course, but they're heavy and slow to set up).  That means very shallow depth of field, and if the subject moves (wind!), the picture gets blurry all over again.

Right after I picked up the lens, I went out to a fairly secluded area (because COVID) and took some pictures.  It was overcast, and the light disappeared pretty quickly after the first thirty minutes, and it was also pretty breezy, but I did get some nice pictures.  I also got a ton of terrible, blurry pictures.  Have I mentioned my shaky hands?

I'm excited to go out again and re-try with better light!

Yesterday my family visited the Getty Museum in Los Angeles.  We're down in Irvine, staying with my grandparents, and we had never been before, so we went.  My dad being a great enthusiast of museums also facilitated this trip. I brought along my camera and new lens (Nikon D40 and Rokinon 14mm 2.8).  I also brought a 35mm prime lens for the pictures, since the Getty's website said non-flash photography was permissible and I wanted pictures of the artwork inside. I had never seen the museum itself, and honestly I would have been happy walking around the outside and on the grounds for the entire day.  The museum is situated at the top of a hill overlooking Los Angeles, and is a very modern-looking, artsy building.
Read more

Last weekend was Black Friday, and I've had my eyes on this lens for months.  I enjoy photography, especially astrophotography and macro photography.  But since I'm in college, money isn't something I can just throw around.   The price dropped by a full hundred dollars on Black Friday for the Nikon version of the lens, which was perfect.  I couldn't resist buying it (according to camelcamelcamel, it was the lowest price it had been in two years).   Even though finals are approaching and there are a lot of projects/tests that need my attention, I couldn't help but take some pictures with it.   There's a highway overpass next to my boyfriend's apartment, and we walked over there to get some long exposures.  It was very, very cold and he complained the entire time.  I was too excited to be cold, I think.  I've never taken long exposures of the highway before, but I've always wanted to.
Read more