- April 20, 2020
I play a lot of tennis.  At least, I played a lot of tennis, until the COVID-19 pandemic hit.  Then instead of tennis, I spent my weekends inside catching up on sewing projects, playing unhealthy amounts of video games, and wishing I was outside on a court.

I've subscribed to Tennis Channel, read Brad Gilbert's Winning Ugly, and listened to other fellow tennis players talk about jumping fences to sneak a couple sets in from time to time.

And then, while browsing NextDoor, I saw a post for a stringing machine (many sections censored, because internet). 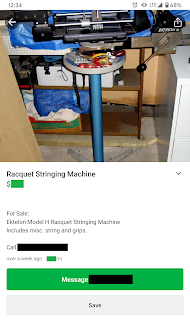 Even though it was a fairly high price for me (a few hundred dollars), I still was interested.  It was originally listed for a bit more, but I assume the owner dropped the price after it didn't sell for a while.


I looked up what an Ektelon Model H was and found many online references to this machine.  It is generally highly-regarded, known as an incredibly consistent and reliable stringer, plus simple to use.  Oh, and a version of it is still in production today, and that machine retails for $1399.00 (Prince Neos 1000).

The online sources and forum threads about this machine almost all agreed that anywhere below $350 was a good deal for the machine, provided it was in good condition and had all the parts.

I had looked into stringing machines in the past, mostly newer drop-weight machines.  Those are smaller table-top machines, but still retail for a few hundred dollars new.  They're generally less accurate than crank or electronic tension machines, but aren't over a thousand dollars.

I had a couple problems when considering purchasing this machine.  I have never strung a racket before, and didn't actually know how to tell if the machine worked or even had all the pieces.

The owner, however, had used this machine for many years, strung professionally, and definitely showed me that it was in proper working condition when I arrived to check out the machine.  They also were quite generous and gave me all of their string and grips.

And it was a lot of string. 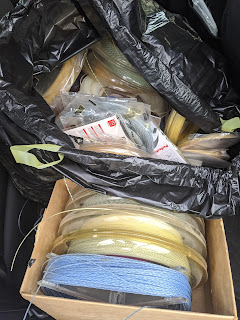 This picture doesn't quite show the scale of the amount of string though. 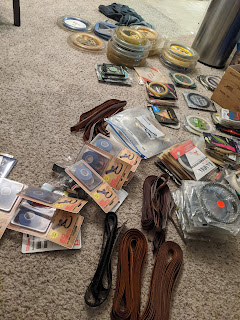 This is a bit better.

12 reels of string.  Probably about 50 packets of string (some are natural gut!).  Most of the string is nylon.  6 sets of grip, 3 rackets worth each.  Numerous leather grips, unfortunately most were made for smaller, classic racket sized handles and don't quite fit my rackets.

I'm glad I held off on an order of synthetic gut until I had actually purchased the machine.  Definitely don't need to buy any string anytime soon.

I'm very happy with the machine.  It's incredibly simple, but incredibly good at stringing rackets.  I strung my first racket using YouTube tutorials and am looking forward to stringing many more!

Yesterday my family visited the Getty Museum in Los Angeles.  We're down in Irvine, staying with my grandparents, and we had never been before, so we went.  My dad being a great enthusiast of museums also facilitated this trip. I brought along my camera and new lens (Nikon D40 and Rokinon 14mm 2.8).  I also brought a 35mm prime lens for the pictures, since the Getty's website said non-flash photography was permissible and I wanted pictures of the artwork inside. I had never seen the museum itself, and honestly I would have been happy walking around the outside and on the grounds for the entire day.  The museum is situated at the top of a hill overlooking Los Angeles, and is a very modern-looking, artsy building.
Read more

Last weekend was Black Friday, and I've had my eyes on this lens for months.  I enjoy photography, especially astrophotography and macro photography.  But since I'm in college, money isn't something I can just throw around.   The price dropped by a full hundred dollars on Black Friday for the Nikon version of the lens, which was perfect.  I couldn't resist buying it (according to camelcamelcamel, it was the lowest price it had been in two years).   Even though finals are approaching and there are a lot of projects/tests that need my attention, I couldn't help but take some pictures with it.   There's a highway overpass next to my boyfriend's apartment, and we walked over there to get some long exposures.  It was very, very cold and he complained the entire time.  I was too excited to be cold, I think.  I've never taken long exposures of the highway before, but I've always wanted to.
Read more